This winter I was able to spend some time in the studio with Courtney Murphy.  Recently finishing up her residency at the Clay Studio of Missoula, she has nestled in cozily at the Brunswick Building downtown Missoula where she shares the space with two other crazy-talented local artists.  She worked gracefully in her element, ignoring the nosey camera girl snapping photos in the corner and in her face.  Thanks Courtney!  Below are some thoughts of hers on her journey in clay. 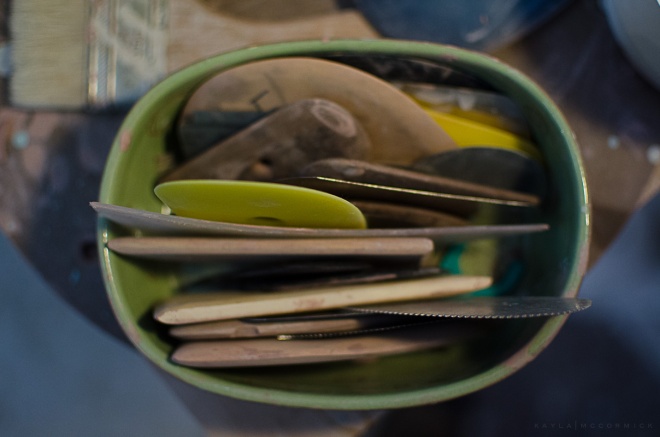 ^ Here is her wheel and some tools used early in the process. 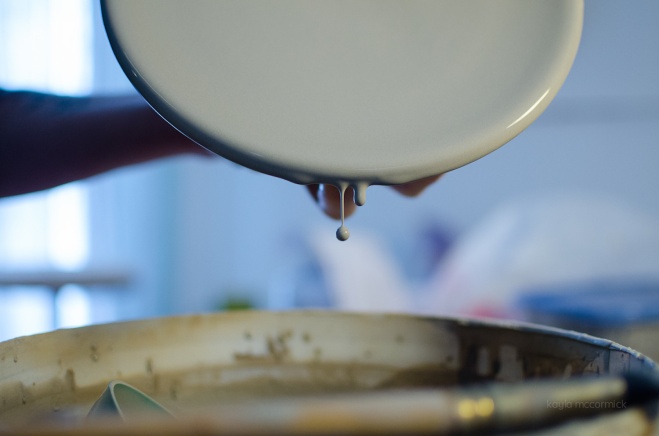 ^ I was able to see the slipping process that she uses.  She has her technique mastered!

^ Clay is a messy medium.  This gal has staying clean covered – literally. 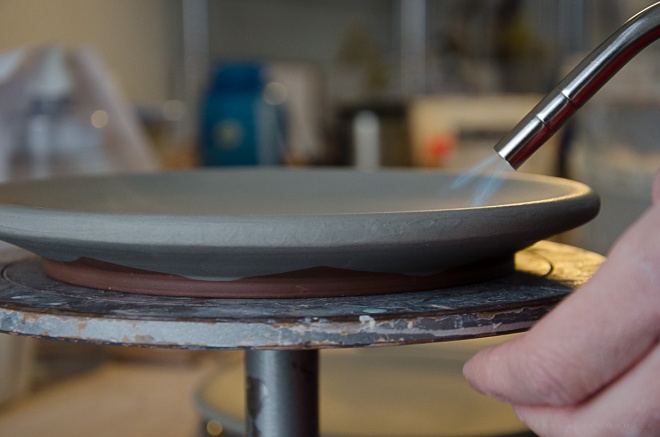 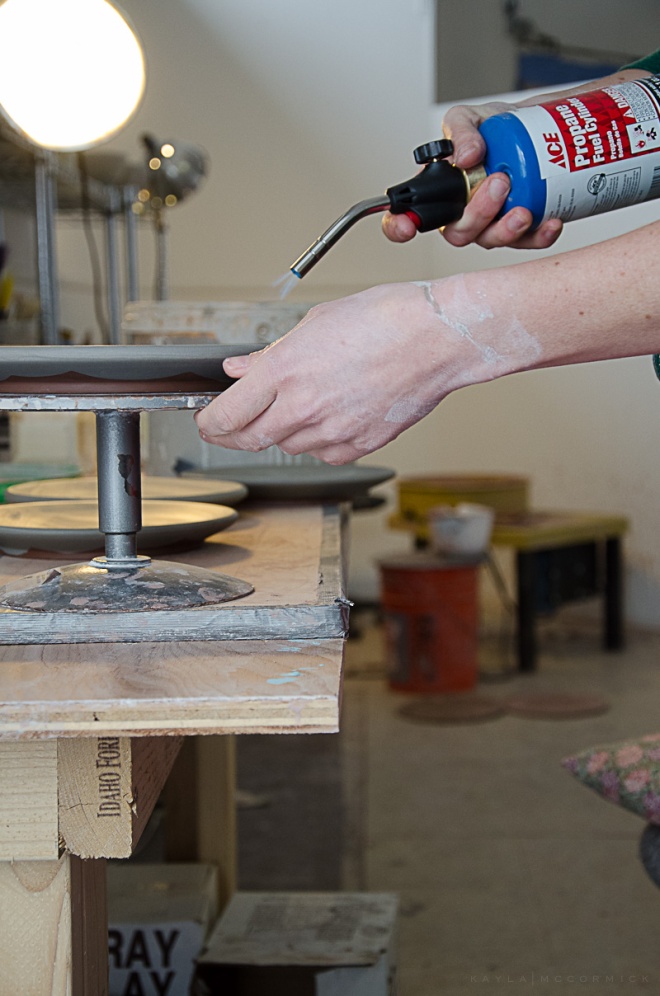 ^ in her quiver of tools, you’ll also find a torch – used in speeding up the drying time

I know you didn’t originally go to school for ceramics.  What made you choose this path?

I studied Sociology in undergrad at Boston University. Shortly after graduating, I moved to New York and took a Ceramics class at a community center. I didn’t have any sort of natural talent for it when I first started, but I was really intrigued by the process, and really interested in learning more, so I put a lot of time in outside of class.

I noticed a flier on the bulletin board for a work exchange in my neighborhood in Brooklyn. I began working for another potter, we were both the same age, just out of school, and she had already started a production line, and was participating in trade shows.

I found myself spending more of my time working in her studio, and asking her a lot of questions. I was really interested in what she was doing, and we were so similar in a lot of ways, that I could see myself making a career out of clay, even though I wasn’t really sure how to go about that. She ended up moving out of the city, and I continued to work for other potters, learning different parts of the process as I went along.

After doing this a little over a year, I realized that I no longer wanted to live in New York, and if I really wanted to get somewhere with ceramics, I should go back to school and have a more formal training. I applied for a post-baccalaureate degree at Oregon College of Art & Craft in Portland, got accepted, and I’ve been doing this pretty much full time ever since then.

You recently planted your roots in Missoula – tell us a little more about Missoula’s draw.

I’ve moved a lot over the years, which has been great in a lot of ways, I’ve gotten to experience different parts of the country and meet a lot of wonderful people along the way…. But it’s also been hard to meet so many great people and become close to them only to move again.

I lost both of my parents a couple of years ago, which left me feeling like the ground had been taken out from under me, in a lot of ways…. I was already tired of moving around so much, and I think it made the whole experience made the need for a sense of home, and some grounding a lot stronger….

I just bought a house this past September. I’ve been in Montana a bit over five years now…. I spent a little over two years in Helena, and several months in Red Lodge, and I’ve now been in Missoula for about two and a half years. I really love all three places for different reasons, but I felt like Missoula was the best fit.

For me Missoula is the perfect size… there’s always a lot of interesting things happening, good food, music, films, literary events…. a nice arts community. Since I’ve started thinking about it as a more permanent place to be, I feel like I keep meeting more and more interesting people and getting to know different parts of the community.

What inspired you then and what continues to inspire you?

I think I was initially really drawn to the process of ceramics… It’s still amazing to me that you can start out with a lump of clay and transform it into really almost anything. There’s so much possibility and variety in what you can do that I feel like it’s a medium you could never really get bored of, even after a lifetime of work. I’m always inspired to try and get better, and to make better work. Small victories in the studio are still extremely satisfying.

I’m inspired by all sort of beautiful things that are made with care, by hand… whether it’s food, or a handmade bag, jewelery, or a cutting board. I appreciate good craftsmanship and attention to detail. I like things that have a lot of thought put into them, I feel like that usually translates through to the finished product

I look to lots of different things- patterns, textiles, objects of all sorts. I’m generally drawn to simple forms, that have a sense of grace and quietness.

Describe your style and who/what your work might be intended for?

My style is pretty minimal, I make fairly simple clean forms. I’d like people to use my work everyday, and to have it become a part of a person’s daily routine.

I think having handmade beautiful objects a part of your daily life is good for people. It’s important to have that connection between an object and the maker.

What are the biggest and most rewarding hurdles in your field?

The biggest hurdle for me has definitely been marketing my work in the right way, and getting it in front of the people who will be interested in it and appreciate it. I’m a bit of an introvert, I’d much rather promote someone else besides myself…. It’s a hard part of the job, one which I’ve mostly tried to avoid over the years, but I’ve been putting a more conscious effort towards in the past few months….

I really enjoy participating in a local market in Missoula called the MADEfair, which happens twice a year, once just before Christmas, and once in the summertime. It’s my main opportunity to do direct sales, and I really appreciate getting feedback from people, and seeing how they respond to my work in person. I’ve been doing it for a couple of years now, and it’s felt really good to build up a local customer base, and have conversations with people about pieces they bought from me in previous years, whether they’ve become a part of their morning routine, or they were a wedding gift for someone…. It’s nice to hear of how my work is existing out there in the world.

I’ve been trying to jump over these hurdles, and confront the things that are difficult for me through both online business/ art classes, and the Montana Artrepreneurship Program…. Basically trying to understand the business side of things more, and seeking ways to market my work in ways that still feel comfortable and like I’m still being true to myself and my values and goals.

What was your biggest achievement in your career to date?

That’s a tough one…. But I would probably say being accepted as a long term resident at the Archie Bray. It was very surprising, and validating. Working in those facilities in a place with so much history, and working with so many thoughtful and intelligent fellow residents… It’s nice to feel a part of a longer story and lineage.

I feel like it definitely opened a lot of doors for me, and helped me take myself more seriously and present myself more professionally.

More recently, this past July I had my exit show at the Clay Studio of Missoula. It felt really good to put together a show of work that I felt really strongly about and knew that I had worked hard to develop. I was satisfied with the overall look at the display, and enjoyed doing some (very minimal) painting on the walls of the gallery. It always feels good to put up a show, and see your work outside of the context of your studio, displayed in a more thoughtful way.

What would you like to achieve going forward and how do you intend to stay motivated?

I’ve been interested in transitioning my work a little more into the design world. Since the new year began I’ve been taking a couple of different business and marketing classes, as well as reading some art/ business books. These were always thing I had very little interest in, and the part of things that I avoided, but lately it’s been really interesting to me.

I feel like it’s really helped me clarify what I want and I’ve been setting lots of small goals for myself, both in the studio in terms of making, and out of the studio, in terms of marketing.

In the past few weeks, I’ve started experimenting with slip casting earthenware…. Early results have been promising, so if all goes well, I think that could have a big effect on how I make my work, and maybe give me the chance to experiment more with surface decoration (if I can cut down a little bit on the amount of time I spend making each piece.)

Who is the most influential person in your life and how have they influenced you?

My dad was definitely one of the most influential people in my life. He lived a very long life (he died at 89). He was the smartest person I’ve ever know, most people who met him felt the same way.

He was always reading, and always engaged and interested in learning new things. I don’t think he really understood what I was doing, and he worried a lot about me ever making a living… but he knew that it made me happy, and he was supportive of that.

What I’ve tried to take from him is that sense of engagement and interest in so many different things, so that life always stays interesting. Like him, I want to always be learning new things.

Any words of wisdom for inspiring clay kids?

I think the main thing is sticking with it, and putting in a lot of hours. It’s going to be hard, and it’s going to be frustrating…. Bad things will happen in kilns, pieces will break, glazes will bubble, but just keep at it, and the good parts start to outweigh the bad more often as you go along.

The rewards are great, it’s really satisfying to see yourself get better through hard work. The community is amazing…. If you can’t figure out the answer, or something is really stumping you, there is always someone to help or who can point you in the right direction.

If you could eat anything out of your favorite piece of ceramics, who’s work would it be and what would you eat!?

I don’t think I’d be able to pick just one. I probably have over 50 mugs…. Mostly trades from other people, and I use almost every one. Different mornings I wake up wanting to drink coffee out of different mugs…. Probably my first big decision at the start of each day…

Also, Courtney had asked me to design her website.  Check it out here and pick yourself out something real nice.  Join in on the handmade movement folks! You won’t regret it. 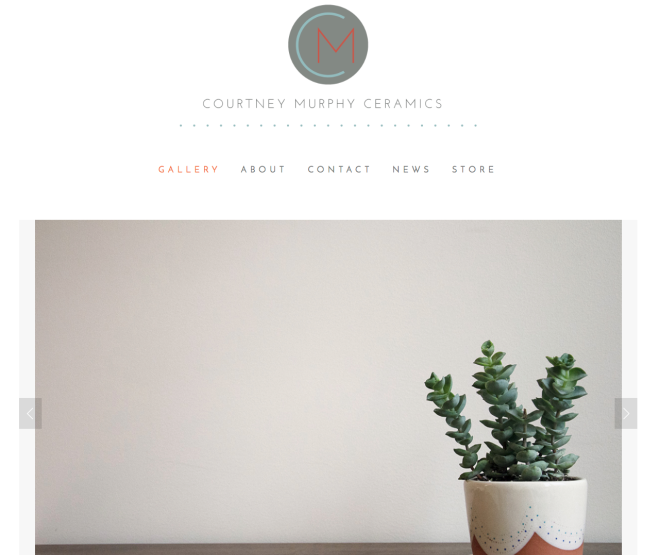 This is a home for all things made by hand.  Inspired by all of the incredibly passionate and hardworking artists in my life, this will be a platform to showcase exquisite one of a kind works of art and help you get connected so you too can break out of the ordinary and make your life extraordinary one piece at a time.

LET’S SEE WHAT TREASURES WE CAN UNLOCK